Given that most of the machine learning algorithms end up optimizing some cost function (i.e., objective function), knowing about convexity would help understanding the properties of these algorithms. For example, support vector machines (SVMs), linear regression, ridge regression, and lasso regression generate the convex cost functions, and maximum likelihood estimation of logistic regression generates a concave cost function. On the other hand, neural network based models deal with non-convex optimization (i.e., neither convex nor concave).

This post presents the definition and properties of convex functions.

Following figure shows the property of convex functions graphically. $y_s$ is the r.h.s. of the inequality and $y_c$ is the l.h.s. This should hold for the whole segment and for all such possible segments. 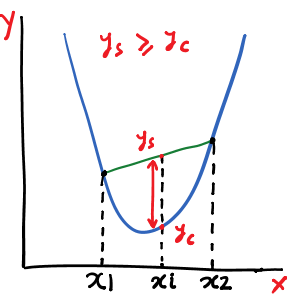 Note: the above inequality is called Jensen’s inequality.

A function is called strictly convex if: