An example of a stochastic process could be as simple as flipping of an unbiased coin at every second for a minute. We can model it as a sequence of sixty independent and identically distributed (iid) random variables based on Bernoulli distribution with its parameter as 0.5. A complex example could be some noise in an electric circuit over time, stock market over time or Brownian motion.

A Markov chain is a special kind of stochastic process, which obeys the Markov property. The Markov property states that the conditional probability distribution of the next state depends only on the current state. This property is also called memorylessness, in contrast with a general stochastic process, it does not matter what the past states are, only the current state decides the next state. Mathematically, the property is stated as:

Using this property, we can write the joint distribution of the sequence as:

To summarize, Markov property states that the next state does not depend on the past given the present.

Flipping an unbiased coin sixty times for a minute is also an example of a Markov chain. This is called a Bernoulli process, the underlying probability distribution is a Bernoulli distribution with the parameter 0.5. This is an extremely simple case, where the next state is not even dependent on the current state.

The state space of a Markov chain could be continuous as well. Consider an example with the conditional probability distribution at $t+1$ as: $Pr(X_{t+1} | X_t = x_t) = N(x_t, 1)$. Here the state space is real numbers, and the next state is specified as a normal distribution with its mean as the current state and variance 1. 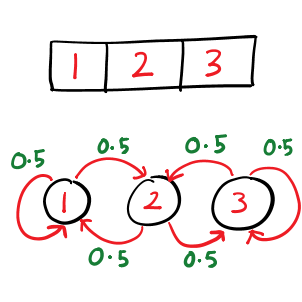 Note that the equation looks similar to the one of eigenvalues and eigenvectors. Precisely, $\nu_s$, i.e., stationary distribution of a Markov chain is a left eigenvector of the transition matrix.

Theorem: If there exists a value of $m$ such that $P^m$ has all values greater than zero then:

A state $i$ of a Markov chain is called an absorbing state if $p_{ii} = 1$, i.e., once the state is attained, the state never changes. In other words, the state keeps changing to itself.